"Why I Am a UU Humanist", by Richard M. Renfro 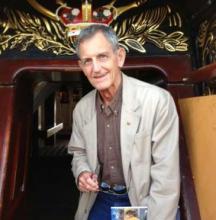 Editor's note: this is another essay in the "Why I Am a UU Humanist" series. What is your story? Contact us and let us share it. (Please note that the essay content deadline is May 26, 2014.)

The question is: "Why are you a Unitarian Universalist Humanist?"

The answer is: not so easy.

I don't know why I am a Humanist. I just am. Rather late in life I learned that "Humanism" defines my personal outlook. (I think "worldview" is just a bit pretentious.)

I do know why I am a Unitarian Universalist. [My late wife, Fran, would say, "The short version, Dick."] After trying several Christian denominations over the years, by 1970 I would be what we now call a "none." Sometime in the mid 1980s I gave a ride to the elderly Catholic gentleman living across the street who liked to attend the Christmas service at the Universalist Church in St. Johnsbury, Vermont. Leafing through their ancient Hymnal for Churches of the Free Spirit (circa 1940) I came across the following which I wrote down as an "alternate creed" (little did I know that "creed" is a dirty word in the "free church"):

The authority of evidence;

The supremacy of intelligence;

The leadership of competence;

The validity of freedom; and

The goal of commonweal.

OYG; something calling itself a "church" and believing stuff like that?! I was especially drawn to "The leadership of competence" having been exposed to too much of the other kind over thirty years in the U.S. Army. So I took the above as my personal credo and borrowed a book to read up on the history of the Unitarians and Universalists. Good stuff. When I learned that the Universalist Church of St J did not belong to the Unitarian Universalist Association of Congregations (UUA) (it does now) I joined the Universalist Society of West Burke, Vermont in 1987.

In 1989 Fran and I moved to Lexington, Kentucky and I joined the UU Church of Lexington (UUCL), the only game in town. In 1998 I complained to a friend about the New Agey feel good pap that was being preached there. My friend, Chuck who had come from Los Angeles said that in LA one had the choice of several flavors of UUism. He had belonged to the UU congregation of the old Blacklisted screen writers - the pinko, lefty, Socialist UU congregation. Chuck asked, "Is there any reason we couldn't have a Humanist fellowship at the UUCL?" I was aware that "HUMANIST TEACHINGS which counsel us to heed the guidance of reason and the results of science, and warn us against idolatries of the mind and spirit" are among the sources of the "Living Tradition" of UUism and had wondered what those teachings were. I had heard of the "Humanist Manifesto" but had never read it. I now have - many times, all three versions and counting. And so was born the Humanist Forum that has been meeting at the UUCL monthly since September 1998.

Why I Am a UU Humanist

In the year 2000 I attended the Annual Meeting of the Friends of Religious Humanism (FRH) during the UUA General Assembly in Nashville. As a result of my becoming a member of the FRH I not only became a subscriber to the magnificent journal religious humanism but also the recipient of the book American Religious Humanism by Mason Olds. From that book I learned that the golden words above that I have taken as my credo come from the writings of Curtis W. Reese who, among other things, was Secretary of the Western Unitarian Conference, 1919-1930. (For those not familiar with Unitarian history please note that in 1919 "Western Unitarian" meant west of the Hudson River.) Then I knew my belief system had a name, "Humanism." Curtis Reese is my hero.

At the FRH Annual Meeting in 2001 new By-Laws were adopted changing the name of the corporation to "HUUmanists" to clearly indicate our affiliation with the UUA. And that is why I am a "Unitarian Universalist Humanist" aka a "HUUmanist."

Categories:
Why I am a UU Humanist essay