The 2012 Unitarian Universalist Association (UUA) “Justice” General Assembly (GA) in Phoenix was a very special one for UU Humanists. Our keynote presentation, our booth presence, and our annual meeting/reception were all clearly focused on the GA theme of Economic Justice.

Our booth in the exhibition area was organized around the theme of economic justice and was shared with the American Humanist Association, The Institute for Humanist Studies and several local social justice groups including the Secular Coalition for Arizona. A special issue of our journal, Religious Humanism, dedicated to the GA theme was available at the booth, along with other publications and membership opportunities.

The HUUmanists Association Annual Meeting and Reception was held on Friday, June 22, 2012, at the Renaissance Phoenix Downtown Hotel. During the business portion of the meeting, John Hooper was re-elected as President, Maria Greene elected to be Secretary, and Kristin Wintermute as a Director at Large. The remaining officers and board members’ terms expire in 2013 or later. The FY 2013 budget showing a slight surplus was approved by the membership. During the formal portion of the program, Edwina Rogers, Executive Director of the Secular Coalition for America (SCA) presented an overview of the SCA and its activities (see video at the bottom of the page); Serah Blain, the Executive Director of the Secular Coalition for Arizona (SCAz) told the attendees about the especially difficult challenges of infusing secular principles into Arizona’s public affairs (see video at the bottom of the page); and Tony Diaz, “el Librotraficante,” described his fight for the repeal of Arizona House Bill 2281 (see next item). 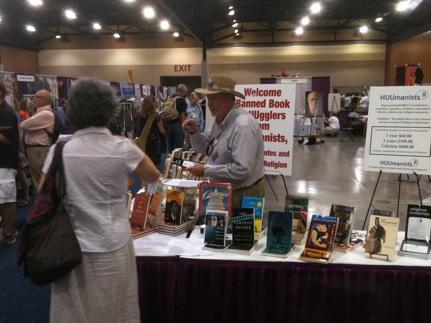 Arizona has banned books used in teaching in Arizona public schools that advocate the overthrow of the government, which has been applied to ethnic studies in a devastating way. Arizona House Bill 2281 was created to prohibit teaching courses in Mexican American Studies, although it can be applied to any ethnic group. The Tucson school system closed the entire K through 12 Mexican American Studies program in order to comply with this bill, and removed some 83 books from the curriculum. Tony Diaz, a professor of English at the University of Houston and a Mexican American, heard about this bill and started Librotraficante, an organization dedicated to providing the banned books for community libraries in Arizona. He obtained a van and asked for donations of these books so he could take them to Arizona. HUUmanists Association, through our journal editor and booth coordinator, Roger Brewin, answered Tony’s call. Roger asked for people to email him their interest in smUUggling a book or donating to the effort, both on our web site and by email to our members. Approximately 300 people brought a book to GA or donated money to buy one. At GA, the “smUUggled” books were put on display at the HUUmanists booth in the exhibition hall before being donated to Librotraficante. This was a major attraction to the booth, and many who attended also donated cash to the effort or bought some of the 20 books from the banned book list at the UUA bookstore in the exhibition hall. Cash donors or those who donated books received a “smuggler” or “Librotraficante” button, a copy of the journal Religious Humanism GA justice issue, and will be mentioned in a newsletter to be issued this summer.