What if the World Went Humanist? Ten Pulpit Addresses by John Dietrich 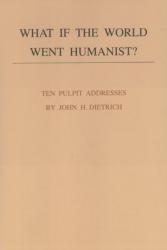 John H. Dietrich , 1878-1957, was a student at Eastern Theological Seminary of the Reformed Church, Lancaster, Pennsylvania, then became minister at St. Mark's Memorial Church in Pittsburgh.  He grew to be more liberal and was indicted for heresy.  He left the Reformed Church and became a Unitarian minister in Spokane, Washington, advocating a religion predicated on naturalistic humanism.  He later became the minister of the First Unitarian Society of Minneapolis.

At this time the liberal-fundamentalist controversy was developing, and he was cutting a new theological path in liberalism. At the end of his first decade among the Unitarians, he, along with Curtis W. Reese and others, had precipitated the so-called humanist-theist controversy.  It raged until the late 1930s, when the American Unitarian Association finally decided that its doctrine of "the freedom of individual thought" must be broad enough to embrace both humanists and theists - not simply for laymen sitting in the pews but also for ministers in the pulpits.  As a result of the pioneering work of Dietrich and others, there arose the religious humanist movement, which, though it embraced a small but influential membership, moved beyond the confines of a single liberal denomination.

This selection of Dietrich's sermons, first published in 1989, were chosen by Mason Olds, the author of Religious Humanism in America: Dietrich, Reese, and Potter, 1996, which contains one of the best treatments of Dietrich that is available anywhere.