Wrap-Up of the 2015 General Assembly in Portland, OR: Building a New Way

The 2015 UUA General Assembly is over now and we are finishing tallying up, following up, and evaluating how it went and what we will do differently next year. GA is always a fantastic time to connect with each other in person and to introduce the Association to a whole new group of UUs.

Our booth in the Exhibit Hall could not have been in a better location -- at the end of an aisle directly across from the entrance doors. As usual, Roger Brewin, in the light blue shirt in the picture below, did a yeoman's job planning, setting up, and later tearing down the booth. Click on the picture below for several more shots showing the different displays on the tables. 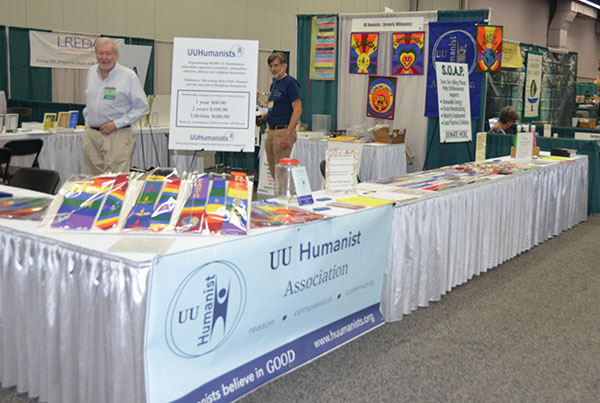 Featured in the booth were the usual "eye candy", as Roger calls it, which included bumper stickers, pins, and magnets as well as, new this year, rainbow-hued ties, stoles, and banners with humanist and UU symbols, donated to us by member and friend Rev. Jim McConnell. Given the fantastic news we received in the midst of GA about the Supreme Court ruling on same sex marriage, those were a big hit and sold out fast!

The booth also featured displays about the new Freethinker Friendly congregation program, the S.O.A.P. environmental justice project, various books (most from our own press) and our journal for sale, UU Humanist t-shirts, and a few panels from the Ribbons Not Walls immigration rights / banned books project featuring a panel made by our Religious Humanist of the Year award recipient, Kendyl Gibbons.

Over the course of the week, we signed up almost 100 new or renewing members, sold a lot of fun and provocative merchandise, and had hundreds of fascinating conversations with UUs about humanism in their lives and congregations.

It was a banner year in another way -- we now have a banner! President John Hooper carried our banner in the parade during the Opening Celebration on the first day. 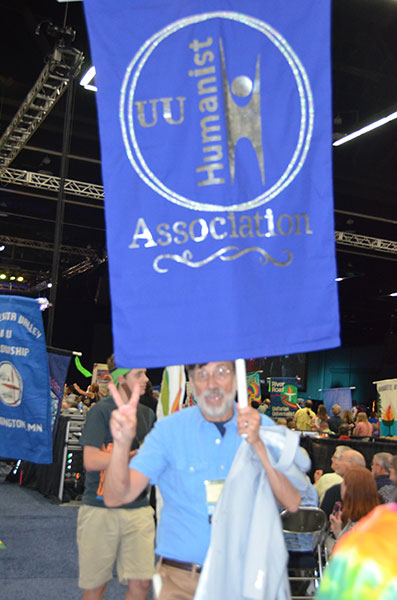 We also displayed the banner in the booth all week and during our events.

On Friday, we came together for the program we arranged, "Serving the Nonreligious", then for our Annual Meeting and presentation of our yearly award. After the formal meeting, many of us hung around enjoying the refreshments and strategizing ways to involve more of the members from the west coast and how to work with related organizations.

While at GA we also attended many interesting programs, particularly in the Innovation and Growth topical track learning about developments like multisite and emerging ministries, and in the #blacklivesmatter and #commit2respond climate justice tracks. As usual, the worship services were inspiring but sometimes uncomfortable, at least for me. We encourage all who went to GA to use the GA Attendee Feedback survey to express their honest opinion. The Ware Lecture with Dr. Cornel West and the #blacklivesmatter demonstration were highlights, as was the spontaneous marriage equality celebration.

We owe a big thank you to all the board members who attended and helped out, to our members Warren Wylie, Chris Schriner, and Jack Reich who spent many hours in the booth, to our speakers David Breeden and Kevin Jagoe (both of whom are now on the board as well), and to the UU Community Church of Washington County that lent us a projector (and saved us several hundred dollars in rental fees).

We've started planning already for next year's GA in Columbus, OH. While we await details about the theme of GA '16, we've already decided to focus our outreach on Positive Humanism and to grapple with the interesting topic of Humanist "Spirituality". We look forward to continued engagement with the extended UU community!