A Humanist Take on Meaning and Purpose 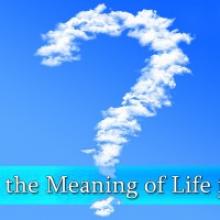 Have you ever felt like you go through the motions every day but it all seems meaningless? Did you know that you can use science to help you find a sense of life purpose? Wait, but science can’t answer life’s big questions – that’s the job of religion, right? Well, a wave of recent research in psychology, cognitive neuroscience, and other disciplines has explored how we find meaning and purpose in life, with or without belief in a deity!

I wish I knew that when I was growing up. I struggled with gaining a sense of life meaning and purpose throughout my teenage years and young adulthood. I remember experiencing the sense of meaninglessness as an emptiness deep in the pit of my stomach.

This sense of life purpose is not a trivial matter. Recent research shows that people who feel that their life has meaning experience a substantially higher sense of wellbeing and even physical health. For example, Michael F. Steger, a psychologist and Director of the Laboratory for the Study of Meaning and Quality of Life at Colorado State University, found that many people gain a great deal of psychological benefit from understanding what their lives are about and how they fit within the world around them. His research demonstrates that people who have a sense of life meaning and purpose feel in general more happy as well as more satisfied on a daily level, and also feel less depressed, anxious, and are less likely to engage in risky behaviors.

According to faith-based perspectives, the meaning and purpose of life is to be found only in God. An example of a prominent recent religious thinker is Karl Barth, one of the most important Protestant thinkers of modern times. In his The Epistle to the Romans (1933), he calls modern people’s attention to God in Christ, where the true meaning and purpose of life must be found. Another example is The Purpose Driven Life (2002), a popular book written by Rick Warren, a Christian megachurch leader.

But some thinkers disagree with the notion that religion is the only way to find meaning and purpose in life. Jean-Paul Sartre, in his Existentialism and Human Emotions (1957), advances the notions of “existentialism,” the philosophical perspective that all meaning and purpose originates from the individual. Another prominent thinker is Greg Epstein. In his Good Without God: What a Billion Nonreligious People Do Believe (2009), he advocates striving for dignity as a means of finding “meaning to life beyond God.” Likewise, Sam Harris, in his book, Waking Up: A Guide to Spirituality Without Religion (2014), states that “Separating spirituality from religion is a perfectly reasonable thing to do. It is to assert two important truths simultaneously: Our world is riven by dangerous religious doctrines that all educated people should condemn, and yet there is more to understanding the human condition than science and secular culture generally admit”.

Are they correct? Can we have meaning and purpose, which fall within the sphere that Harris refers to as spirituality and Epstein terms dignity, without belief in a deity?

So what does research on this issue show? Apparently, the important thing is simply to gain a sense of life purpose and meaning: the source of the purpose itself is not so important. Religion can be one among many channels to help someone gain a sense of life meaning. The pioneer in this field, Victor Frankl, was a Viennese psychiatrist who lived through the Holocaust concentration camps. In his research and work, both in the camps and afterward in private practice, he found that the crucial thing for individuals surviving and thriving in life is to develop a personal sense of purpose and meaning, what he terms the “will-to-meaning.” There are many paths to do so. For example, Frankl helped people find purpose and meaning in life through helping others to remember their joys, sorrows, sacrifices, and blessings, and thereby bring to mind the meaningfulness of their lives as already lived. Frankl’s approach to psychotherapy came to be called logotherapy, and forms part of a broader therapeutic practice known as existential psychotherapy. This philosophically-informed therapy stems from the notion that internal tensions and conflicts stem from one’s confrontation with the challenges of the nature of life itself, and relate back to the notions brought up by Sartre and other existentialist philosophers.

These findings fit well with my own research on secular societies. My desire to find a personal sense of meaning and purpose impelled me to pursue higher education and study how people in the Soviet Union, where my family came from, found purpose, happiness, and fun in life. The Soviet Union is typically perceived as a militaristic and grey society, with a government that oriented all of its efforts to taking over the world. Well, that’s simply not true, as the Soviet authorities put a lot of resources into providing its citizens with opportunities to find meaning and purpose in life, as well as fun and pleasure – although they also certainly wanted to spread communism throughout the world, and put a lot of efforts into this goal as well. To understand how the USSR’s government helped its citizens gain a greater sense of meaning and purpose, I spent over a decade investigating government reports in archives across the Soviet Union, exploring national and local newspapers, reading memoirs and diaries, and interviewing over fifty former Soviet citizens. The answer: to a large extent, through government-sponsored community and cultural centers called kluby (clubs). These venues, and other ones such as discos, offered Soviet citizens social and community connections, chances for serving others, and places to reflect on meaning and purpose in life, the three crucial factors that research shows help us gain a personal sense of life purpose.

Present-day societies with a more secular orientation than the United States have similar stories to tell, as illustrated by research on contemporary Denmark and Sweden. Most Danes and Swedes do not worship any god. At the same time these countries score at the very top of the “happiness index,” have very low crime and corruption rates, great educational systems, strong economies, well-supported arts, free health care, and egalitarian social policies. They have a wide variety of strong social institutions that provide community connections, opportunities for serving others, and other benefits that religion provides in the United States.

So where does this leave us? Religion is only one among many ways of developing a personal sense of life meaning and greater sense of personal agency. Based on my research, I presented a workshop at my local UU Humanist group, and had it videotaped for anyone who wants to learn more on this topic. I also developed a free online course, which combines a narrative style, academic research, and stories from people’s everyday lives with exercises to help you discover your own sense of life purpose and meaning from a science-based, humanist-informed perspective. These are part of our broader offerings at Intentional Insights, which aims to help us, as reason-oriented people, use scientific evidence to live better lives and achieve our goals. I hope you can find our offerings helpful for your life!

Gleb is the Co-Founder, President, and Chief Insights Officer at Intentional Insights. Intentional Insights is a new nonprofit that provides content and products for reason-oriented people by translating academic research on rational thinking into practical and easy-to-use strategies that help people reach their goals.

Meaning and purpose is found in the philosophy of Humanism, not in the Church or laboratory. Great men like John H. Dietrich and Curtis Reese already showed us the way to live and to have meaning.