Ribbons on the Road 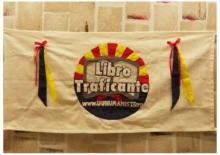 A collection of two dozen fabric arts panels made by humanist and UU artists around the country, began its fall tour during the last weekend of September, with a showing at a Michigan community event and a UU Fellowship Sunday service.  "Ribbons Not Walls" (a project of HUUmanists) invites people to create yard long representations of immigration related events and themes.  The collection includes a starkly poetic rendering of a portion of the "wall" between the US and Mexico by 13 year old Illinois UU Alayna Vesto, two panels featuring the primitive quilting style of Linda Lee, lead artist of the well known Farmworkers Memorial quilt out of Florida, and the HUUmanists "Librotraficante" (Book SmUUggler) Iogo, stitched and be-ribboned by Michigan secular humanist Sherron Collins.

"Ribbons" began as an outgrowth of the Banned Books project run by HUUmanists for the 2012 UU General Assembly in Phoenix (the "Justice GA."). Initially artists depicted themes from some of the 80 books, mostly by Hispanic authors, that were removed from Tucson classrooms when Arizona lawmakers voted to end "Ethnic Studies" in that state's schools. (See RibbonsNotWalls.org or the facebook page ribbonsnotwalls for more information on the Banned Books project.)   Gradually the art project widened to include impressions from congregational events about immigrant rights and culture, and then to individual and group reflections on the impact of the issue on our society.

As panels came in through the spring of 2012, they were put on display singly and in small groups at more than a dozen humanist meetings, UU congregation and district conferences. The first full installation of all the panels was at the HUUmanists booth (see "Big, Bad Booth" article elsewhere in this issue) at the June 2012 GA in Louisville, where it was seen by over two thousand attendees.  Subsequently the minister and members of Berrien UU Fellowship in St. Joseph, MI arranged for the full collection to be on display September 28 at the Berrien County Unity Fest, an annual political event held this year in a huge 19th century barn.  The Ribbon panels were stretched from the rafters, above the heads of 150 diners and dancers. The next morning at BUUF's Sunday morning service, led by Roger Brewin, self-styled "curator" of the project, the panels were held aoft by congregants, then formed a visual backdrop for the post service discussion.

The next stop for the Ribbons tour will be Northern Hills UU Fellowship just outside Cincinnati, with a service by Brewin on the morning of October 27, followed by a public showing throughout the afternoon.  UU ministers in the Ohio River (study) Group will get a look at the panels (and a chance to contribute to the collection) on Wednesday evening November 13 in Dayton, Ohio.  Further showings at art galleries and on seminary campuses are being negotiated.  Humanist groups and UU congregations that would like like to host the art work in 2014 are invited to contact Brewin at Rabrewin@aol.com,  773 881 4028 or 773 551 8540.

"Ribbons began as a way to let artists shine a different spotlight on the issue of censorship, and the right of every culture to define itself without interference," says Brewin - "these are aspects of the broader immigration question that appeal particularly to humanists.  The Ribbons art does not demand that you take a particular political stance on immigration, or that you follow a particular set of actions.  It does demand that you encounter the people and communities involved, through the honest filter of your own emotional reactions and rational convictions. The art both brings you closer to people, and gives you a medium through which to put aside reactivity, and encounter their humanity.  As a humanist, I have "faith" that that sort of encounter can change things."

Roger Brewin became a UU minister in 1977 and is currently retired from active ministry, after serving nine UU congregations. He is Minister Emeritus of First Unitarian Church of Hobart, IN. Roger is a long-time board member of HUUmanists and is editor of our journal, "Religious Humanism". He also performs one-man shows as a historical impersonator of Darwin, Dickens and Clarence Darrow.